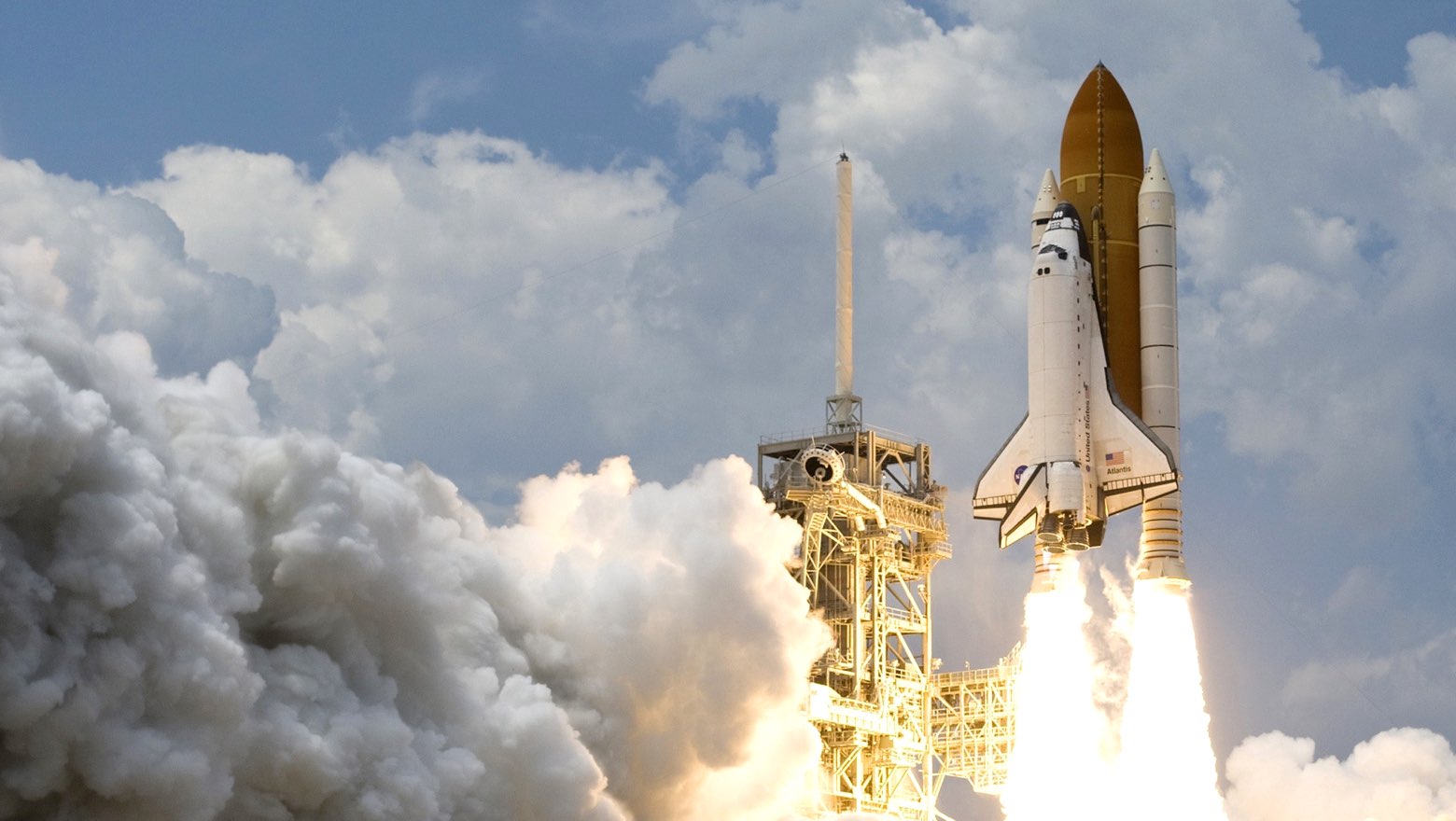 Do you have projects you struggle to get off the ground? I know I do.

My portfolio website shylands.com has plagued me for over a decade. It took me 8 years to replace the original version from 2007, a small lifetime on the internet. The replacement was intended to be temporary too. A quick update before a full blown redevelopment. That was 2015.

Fast-forward to 2018… In the 3 years since the last update I’ve dabbled with new versions from time to time. But none of those ever had my full commitment, and inevitably never saw the light of day.

Why couldn’t I get it launched?

Starting was never my problem. I could even muster up a head of steam and make decent progress. However out of nowhere I’d second-guess a decision I had been so sure of mere hours before. If I couldn’t find a solution then and there I would stop working on it. “I’ll come back to this later” I’d tell myself.

Life continued, “later” never really seemed to happen. The project would drift from my mind. When “later” did finally come around months would have passed. By then everything about my work would no longer “feel right”. So it hit the scrapheap. Losing momentum and confidence in a project sucks. I’d bet it’s something ever web maker struggles with from time to time, but they couldn’t be as hopeless as me right?

Earlier this year and right on schedule, I had a new desire to relaunch shylands.com — but for the first time as a blog. Surely this time would be different. The idea stayed in my head for months, before I told a few friends that I wanted to start writing. They seemed excited to see what I’d produce, and I became motivated to push ahead. Yet I still didn’t do anything about it. Many months would pass again. I wanted to start, but I didn’t. What was holding me back?

Did I prefer spending my free time doing other things? Or maybe I was afraid of putting myself out there? I’ve managed to launch countless projects with other people, but very few of my own. Why did I find this such a challenge?

I learnt long ago from working in startups that the best course of action is usually to launch quickly. Why couldn’t I apply this learning to my personal projects and just get them out the door?

It was then I had an epiphany.

I needed a deadline that had to be met. I needed people to help push me forward when I hit a wall. I needed the accountability I’d get from a team. As long as I was only accountable to myself, I’d continue with my struggles to launch anything. I wondered—could I find a way to create a feeling of real accountability? A sense of pressure, a commitment it would pain me to break.

I opened up ProductHunt and searched for a tool that could help me fix my problem. There I discovered an accountability service offering to act like your boss, at a small cost. While I liked elements of the idea, being accountable to a total stranger didn’t appeal to me.

Then there was Work In Progress—a maker community working in public. This solution resonated with me and seemed closer to something that might work. Yet I didn’t feel confident that if I joined I’d garner the direct accountability I coveted. Sharing my goals publically could compel me to complete them. But if it didn’t, how would I combat my own worst enemy—myself.

Instead, I decided to tweet and see if anyone in my network fancied being my boss for a month. A proposal I’m not sure my followers viewed as legitimate. As you’d expect I received a couple witty retorts, but I did get one real offer from @tyndyll. Result! 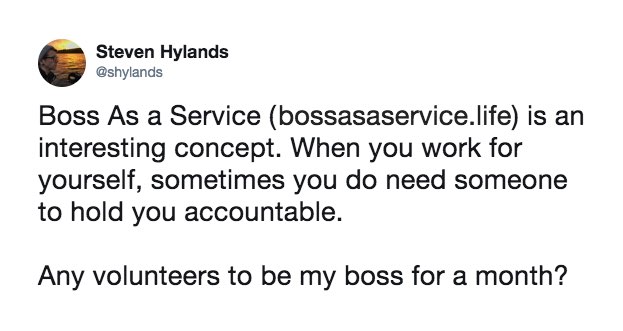 He had been struggling with the same problem of accountability in his projects. We conceived of a solution we thought could work, and decided to conduct an experiment.

We’d create a place where people could come to be held accountable for their goals. Somewhere they could define their projects targets, and then assemble a group who had agreed to offer feedback, encouragement, and most importantly accountability.

To form my group for shylands.com, I invited industry friends @keizgoesboom, @willmcneilly, @wakeuphate and @overture8. People I felt would be up for taking part. Then I returned to Twitter to see if I could round out the group with a few folks I was less familiar with. I wanted a blend of friends and acquaintances.

You’re more likely to get feedback from your friends, but you’ll also be more comfortable failing before them. By including people I was less familiar with, I felt a stronger compulsion to succeed—probably because I didn’t want to face the embarrassment of failing in front of my peers.

The concept resonated with designers @theshawe, @carolinepixels and they rounded out my group.

Full steam ahead! I was pumped.

The process of asking for accountability had already lit a fire under me. I had a burning desire to avoid failure in front of this group. At all costs.

Every project needs a name. In a conversation with group member Melissa Keizer, she named it the wonderfully punny Checkmates. The experiment would take place in a Slack chatroom. I set it up, outlined what I needed to be held accountable for, invited the group and got to work! 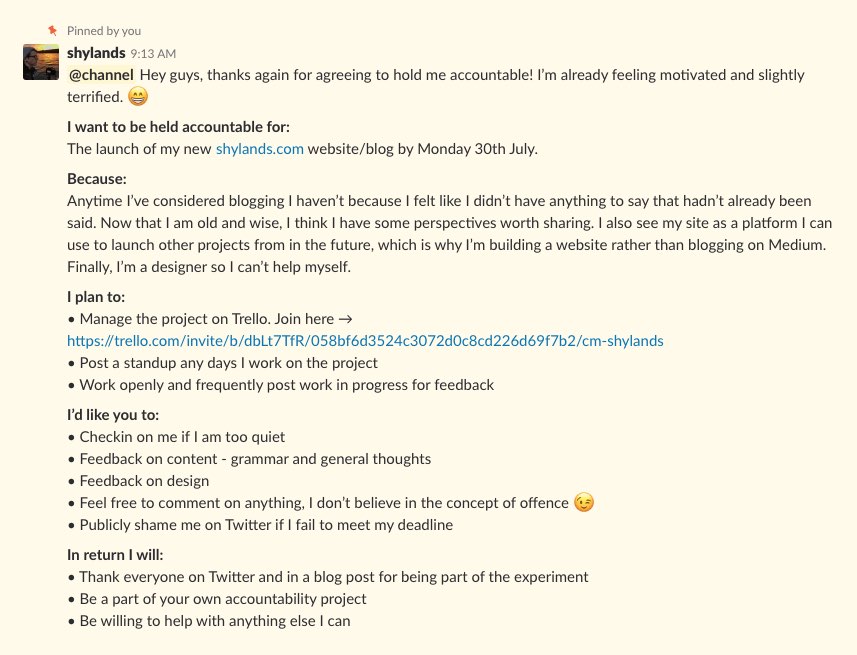 Without drawing out the details, the end result was a successfully launched project, on time. I even managed to squeeze in a stretch goal by writing a third blog article.

Not only did I achieve a feeling of real accountability throughout, but I found the groups feedback led to the launch of a better end product.

In addition, we had a second accountability project setup by Will, and hopefully, more will follow. I know I’ll be using this approach going forward for further developments to shylands.com and other side-projects.

From my own point of view, the experiment was a success. It compelled me to meet a 5-year-old goal in 23 days.

But Checkmates is not a perfect solution, nor do I expect it would work for everyone. Group members are graciously giving up their own time to help you out, so you can’t expect constant interaction or feedback.

My offer to them was to reciprocate in their own Checkmates group, or help with anything else they might need in future. It remains to be seen if anyone will ever take me up on my offer. To value my proposal, the group members first need to have a desire to launch a side project. They then must have bought into the Checkmates concept enough to work on it there. Finally, they’d need to value my opinion; otherwise, the only benefit I can give to them is accountability.

The future of Checkmates

I invite you to try Checkmates for yourself by signing up to the Slack. Why not see if you can pool together your own Accountability Group from people you know or your own followers? I’ll be trying my best to contribute to any new projects that pop up and request my input.

So do you have any a side project you’re struggling to launch? Or perhaps one rattling around your head you can’t quite bring yourself to start?

Well then you should try our Checkmates!